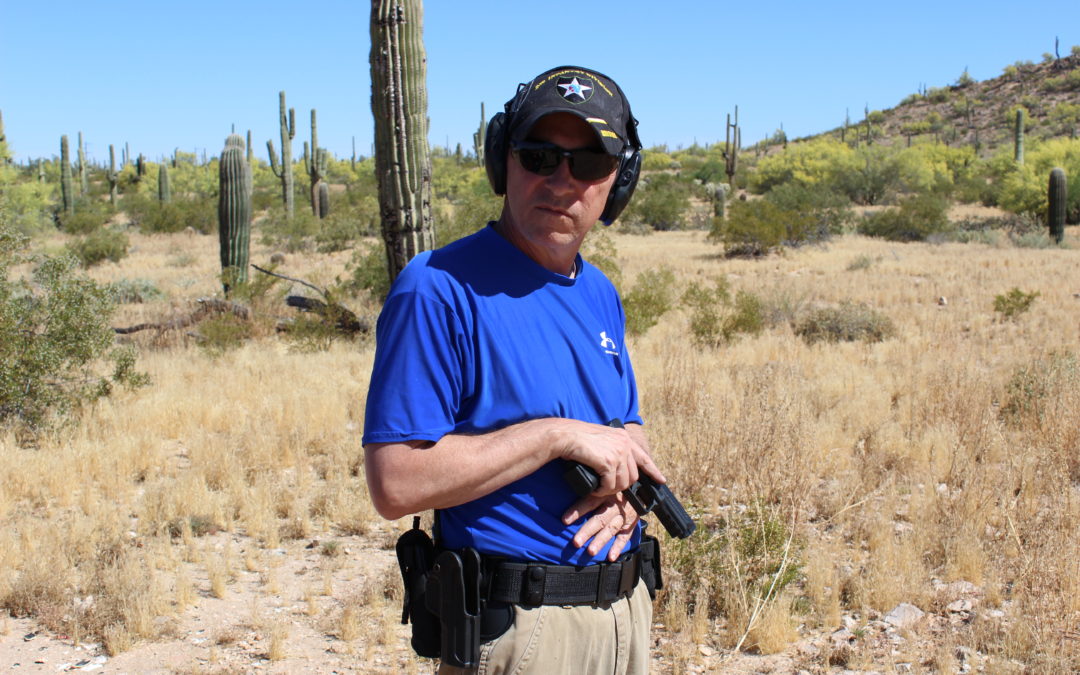 There is no end to the diversity of opinion on how best to do just about anything related to firearms.

Think about it: each “system” of training has a slightly different set of safety rules. There are differences in thought about the best stance, the best grip, the best caliber – just to name a few.

But “ready positions”…. now there is a debate to sink your teeth into. The fact that this topic (and many others) seems to garner such heated debate speaks to how tribal we can become on any topic.

In order not to be left out (heh!), I would like to share my own thoughts on how “ready positions” make sense to me. The caveat here is that I am not trying to encourage you to think differently, and I don’t pretend to be any more of an expert than you are. This is just how it makes sense to me. If you want to tell me “you’re doing it wrong”, knock yourself out. 🙂

First, let’s agree on a couple of things:

Given that you always point your firearm in a safe direction and won’t point the firearm at anything you are not willing to destroy, you have to differentiate immediately between a ready position and a challenge position.

A ready position is generally described as the way you hold an unholstered firearm that keeps it pointed in a safe direction while allowing you to be prepared to either challenge, move, or bring a weapon on target.

There are several “ready positions” – they all have their pros and cons. A couple of examples are:

A challenge position is a readiness to fire on a target while maintaining the second and third rules above. These are generally variations of the ready positions which allow you to instantaneously have your firearm on target

The inherent risks of an accidental discharge from fear, sympathetic grip, or myriad other possibilities resulting in injury or death of someone who is not an immediate, grave threat to you or others is not justified by the additional 0.10 second takes to bring your firearm to bear on a target from a challenge position. A couple of good examples are:

There are many ways to execute each one of the above. Indoors or in cramped spaces might find you posting this a little higher – or maybe a little lower. Your METT-TC parameters and personal preference plays into this as much as you want it to.

Then there is Sul – or Position Sul.

Sul enjoys a bit of notoriety recently as the latest tacticool lightpost for “what works the best” as a “ready position”. Only it isn’t a “ready position” – it’s a movement position – or if you prefer – a carry position.

Now, before we get all hatery in the comments, you should understand I am not bashing position Sul. I love Sul. It is one of the first things I teach beginners and refresh for intermediate shooters. I use it frequently myself because it is effective for its intended purpose.

If you think about the historical context of Sul, it is clear that it was never intended to be a “ready position”. Position Sul was developed by Max Joseph & Alan Brosnan while training South American police who had terrible muzzle discipline and in crowded environments.

While there is nothing wrong with teaching and practicing Sul, teaching it as a ready position, or worse as a challenge position, you are removing the time efficiencies other positions have for effectively bringing the firearm on target.

Sul is a great way to move with the firearm while maintaining good muzzle discipline. It is not nearly as efficient for bringing the firearm on target as a low ready.

Bonus: How about a nice temple index?

Another great carry position to train is a temple index (seen below). There are times when you cannot use Sul safely, nor would other positions be appropriate.

An example of this might be while providing cover for a partner in a kneeling or supine position – but also needing to make contact with your partner as a form of communication. Another example is while exiting a vehicle (think a personal protection scenario).

So – there you have it. It is either wisdom or wizbang and you get to choose. If you have read this far down, I hope you’ve enjoyed it!